What is the current situation with facial recognition in UK schools?

This situation with facial recognition technology use in UK schools is unknown, as is the case for the amount of schools using pupils biometric fingerprints. 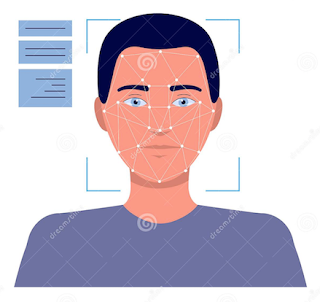 Using the Freedom of Information Act and catching the media on this as it happens seems to be the only way  to see how this technology is being rolled out, as schools are under no obligation to inform the Information Commissioner's Office (ICO), who oversees the Data Protection Act (DPA) 2018 and the General Data Protection Regulations (GDPR), that they are taking and processing children's biometric data.

In England there are:

Murray Park Community School, Derby  - Update 20/10/21:  I have been contacted by Realsmart who have stated, "Realsmart do not provide any systems that work with biometrics". I welcome more clarification on this and will post accordingly.

...another 5,000 students and I suspect there are quite a few more schools too.

England and Wales - explicit consent from parents must be sought for a school to take and process a child's biometric, which was, up to now, mainly in the form of a fingerprint template, this now however extends to photographs used for a facial recognition system.  This is law and the legislation covering a schools obligation to gain consent is in the Protection of Freedoms Act 2012 (PoFA).
Both parents need to consent and so does the child.  Any child or parent not consenting overrules the consent of a parent that does consent.  An alternative to the biometric system must also be provided and this alternative option should be made aware to the parent/s child - see page 10 of the governments 'Protection of biometric information of children in schools and colleges' advice to schools.
Scotland and Northern Ireland - here the PoFA 2012 does not apply.  Scottish schools have tended to ask for consent in line with the PoFA but recently seem to have taken it upon themselves, from exactly whose advice is unknown at this time, to presume that S1-S3 pupils need parental consent and S4-S6 pupils can consent themselves.  See North Ayrshire's consent forms S1-S3 and S4-S6.
S4 students are 14/15 years old, under PoFA no student under the age of 18 can consent to their biometrics being processed by schools.
However, this consent process becomes redundant as indications from Europe show that facial recognition in schools is in direct contravention of the EU legislation GDPR.  Rulings against using facial recognition in schools has been acknowledged by our UK ICO in their June 2021 report, page 22, 'The use of live facial recognition technology in public places': 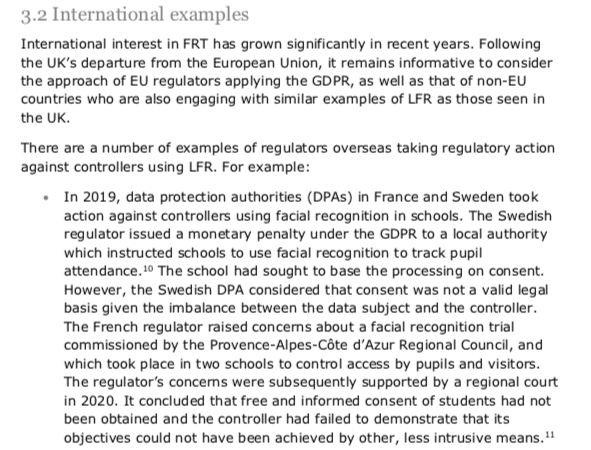 The report went on to state that: "The research found support for the government imposing restrictions on the use of FRT [facial recognition technology] by the police (55%) and in schools (68%). The Ada Lovelace Institute recommends a voluntary pause on the sale of FRT to enable public engagement and consultation to take place." ...in which case why are UK schools spending tax payers money on this legally questionable technology?
The legalities of facial recognition in UK schools is unknown.  We are still subject to the EU GDPR and under that facial recognition use in schools has been in contravention of the strict use of biometrics with minors that the EU Act cites.
Our ICO appears unable to answer what communications they have had with educational establishments or companies supplying facial recognition to schools.  A recent of Freedom of Information on this was refused on 30th September 2021, citing Section 12, exceeding costs and time - I am hopeful there may be a disclosure of some information though - see here.
See WhatDoTheyKnow for Freedom of Information requests on this topic.