Pippa King is a parent whose children were nearly fingerprinted in 2005 when they were 6 and 7 years old for a school library system.  After asking the Head Teacher when the school was going to obtain consent from parents she was told that the school did not need to ask her permission to take her children's fingerprints.  The then UK Data Protection Act 1998 did not consider biometric data as Sensitive Personal Data so parental consent was not required in order for schools to store and process a child's biometric information.

She campaigned from 2005 along with other parents, and privacy/civil liberties organisations, for schools to gain, in writing, parental (and student) consent when they wished to process a child's biometric data, with alternative provision provided for those who did not want their biometrics used in school.

From 1999 to present, biometric technology in UK schools has included the use of children's fingerprints, iris scans, facial recognition and infra-red palm scanning for a range of activities such as library books use, canteen payments, locker access and registration.

The Protection of Freedoms Act was passed in May 2012 which requires, in chapter 2 clauses 26-28, for schools to gain written parental consent if they wish to store/process a child's biometric data as of 1st September 2013.

Through her interest in biometric technology she works to have greater general transparency and accountability with the use of biometrics in the wider community, especially in public spaces, with regards to consent, i.e. police use of facial recognition, and runs the State of Surveillance blog which covers these topics.

Pippa takes an active interest in children rights, including CCTV in schools and RFID (radio frequency identification) tags used to track children in schools.  See her Against RFID in schools website.

Initial letters from 2001 and 2002 endorsing the use fo biometric technology in UK schools, although Scotland started taking biometric fingerprints from secondary school children in 1999.   See 'History of Biometrics in schools' for more information. 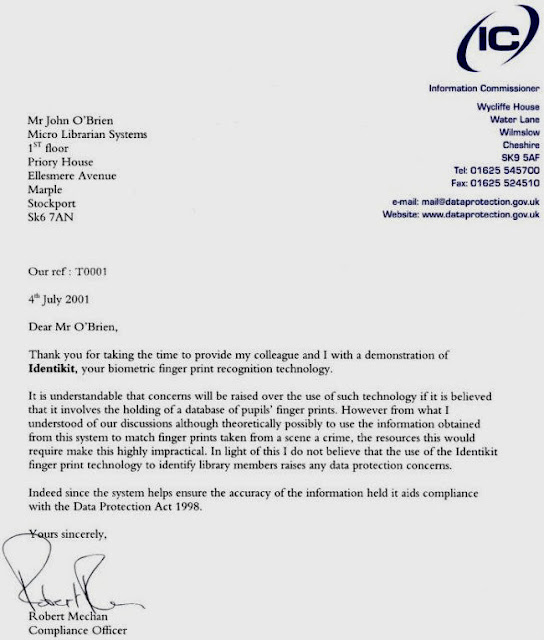 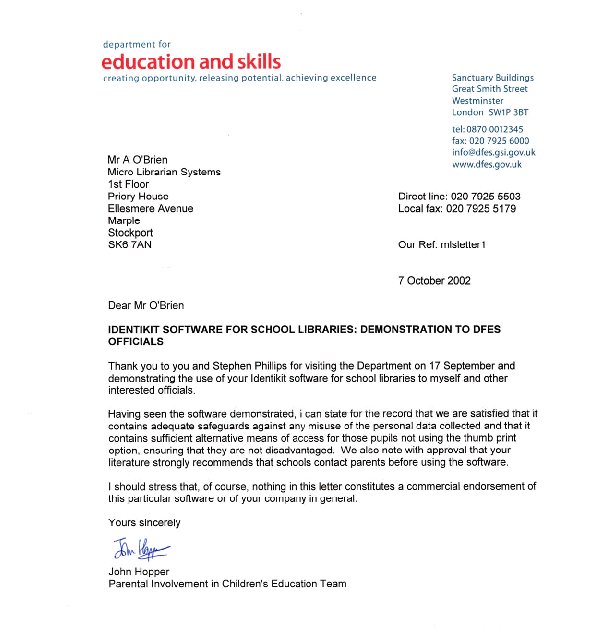 Deptartment of Education UK - Two documents for schools informing of procedure with regards to legal obligation for schools to gain parental consent and to consult with parents and children as of September 2013:
Protection of Biometric Information of Children in Schools
Biometrics in schools - advice for schools and sixth-forms

Security - No computer system is 100% secure. Deleting data is not the same as destroying data.  A child's biometric data must be secure for the rest of its life. A child may have to use their biometric data in years to come.

Police are able to access a school biomertic database if they thought it would help the prevention of crime or detection of crime and not inform parents or child. (UK)
See 'More Schools - same misinformation' and  Home Affairs Committee 'A Surveillance Society' see questions 50 and 51

Biometric failure - Biometric systems are vulnerable to two types of failures: a false-positive, in which a system falsely identifies an imposter as the valid user, and a false-negative, in which the system fails to make a match between a valid user and the stored template.

Application of biometrics in schools - Biometric systems in schools can be used for cashless catering, registration, library, lockers, payment of monies and access (including toilets)

Non statutory guidance was published in 2007 by the UK government quango BECTA (British Educational Communications and Technology Agency, abolished after the Labour Party left Government) and the Information Commissioner's Office.  Schools did not have to adhere to advice given.

Experts and academics  concerns - Please see the link to Leave Them Kids Alone page on this site or to the internet archive site for experts concerns.