1999:  Biometric technology was introduced into Britain's schools by private companies.  The practice of using biometric technology in the adult public domain at that time was virtually unheard of.  Thousands of children were 'fingerprinted' without parents knowledge on systems with no regulations in place.

Britain was the first country globally to use children's biometrics for routine tasks within schools.

See bottom of this page for letters from the UK Information Commissioner's Office 2001 and the Department of Education and Skills 2002 endorsing the unregulated use of biometric technology with children in schools.

By July 2002 Privacy International estimated that over 200,000 children from the age of 7 had been 'fingerprinted'.

2002 - 2010:  Opposition Members of Parliament, from the Conservative and Liberal Democrat parties, frequently asked questions in Parliament about the practice of using children's biometrics in schools.  The responses from the then Labour government were non committal and consistently uninformative.  Non statutory guidance was published in 2007 by the government quango BECTA (British Educational Communications and Technology Agency) and the Information Commissioner's Office.

May 2010:  The Conservative and Liberal Democrat parties formed a coalition after the UK general election.

February 2011:  The Protection of Freedoms Bill was introduced.  Included in the bill was a provision for schools to require written parental consent in order to process children's biometric data.

May 2012:  The Protection of Freedoms Act was given Royal Assent and passed into law in the UK. Chapter 2 of the Act, clauses 26-28, deals with consent when processing a child's biometric data.  This becomes enforceable September 2013.

December 2013:  The following document was published by the Department of Education as guidance, detailing schools responsibilities under the Protection of Freedoms Act 2012, with regards to parental consent and processing under 18 year olds biometric data:
Protection of Biometric Information of Children in Schools - Advice for proprietor, governing bodies, head teachers, principles and school staff


The requirement for parental consent as defined in this Act becomes enforceable In September 2013.

The information and links below are in loose chronological order with the most recent at the top leading up to May 2012 when the Protections of Freedoms Act 2012 was passed into law.﻿


UK GUIDANCE ON THE USE OF BIOMETRICS IN SCHOOLS
(NON STATUTORY)


UK PARLIAMENTARY DEBATES, QUESTIONS AND ANSWERS
ON THE USE OF BIOMETRICS IN SCHOOLS 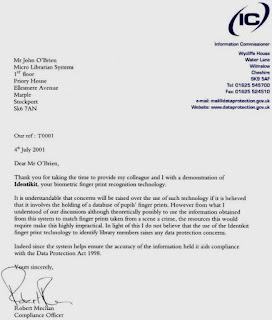 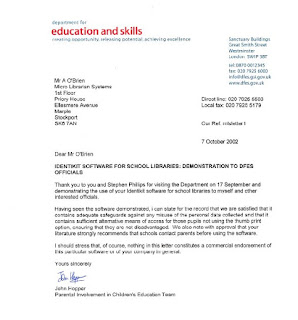 Deptartment of Education UK - Two documents for schools informing of procedure with regards to legal obligation for schools to gain parental consent and to consult with parents and children as of September 2013:
Protection of Biometric Information of Children in Schools
Biometrics in schools - advice for schools and sixth-forms

Police are able to access a school biomertic database if they thought it would help the prevention of crime or detection of crime and not inform parents or child. (UK)
See 'More Schools - same misinformation' and  Home Affairs Committee 'A Surveillance Society' see questions 50 and 51

Security - No computer system is 100% secure. Deleting data is not the same as destroying data.  A child's biometric data must be secure for the rest of its life. A child may have to use their biometric data in years to come.

Biometric fairlure - Biometric systems are vulnerable to two types of failures: a false-positive, in which a system falsely identifies an imposter as the valid user, and a false-negative, in which the system fails to make a match between a valid user and the stored template.

Application of biometrics in schools - Biometric systems in schools can be used for cashless catering, registration, library, lockers, payment of monies and access (including toilets)

Non statutory guidance was published in 2007 by the UK government quango BECTA (British Educational Communications and Technology Agency, abolished after the Labour Party left Government) and the Information Commissioner's Office.  Schools did not have to adhere to advice given.

Experts and academics  concerns - Please see the link to Leave Them Kids Alone page on this site or to the internet archive site for experts concerns.